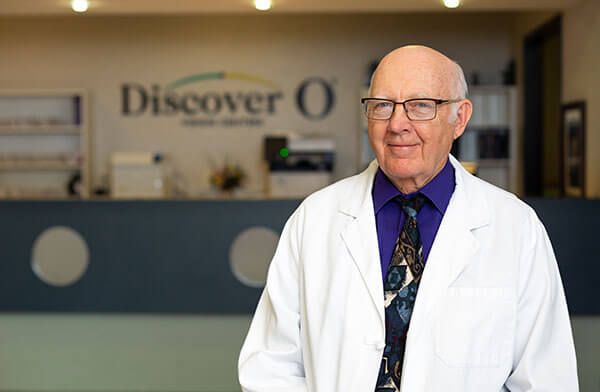 Dr. John C. Hagan is a board certified ophthalmologist, specializing in adult ophthalmology, including cataract consultation and second opinions. Before joining Discover Vision’s Northland location, Dr. Hagan was the founder of Midwest Eye Institute of Kansas City. He has published over 180 scientific articles and designed several surgical instruments. Dr. Hagan is the editor of Missouri Medicine: The Journal of the Missouri Medical Association and is a frequent contributor to clinical research.

Dr. Hagan is a graduate of the University of Missouri. He received his medical degree from Loyola University with a Lange Award for outstanding achievement as a medical student. Dr. Hagan volunteered to serve in the United States Air Force during the Viet Nam War. After honorable discharge, he completed a highly-ranked ophthalmologic residency at Emory University.

In a media poll of metropolitan physicians, Dr. Hagan was selected among “Best Doctors in Kansas City,” and is also listed among America’s Top Ophthalmologists, as published by the Consumers’ Research Council of America. The American Academy of Ophthalmology (AAO) has honored Dr. Hagan with the Secretariat Award, which recognizes ophthalmologists for special contributions to the Academy and to the field of ophthalmology, as well as the distinguished Hall of Fame Award. He was also a past President of the Metropolitan Medical Society of Greater Kansas City and now serves on its board. Dr. Hagan was presented with the 2019 Hal Foster Award by the Kansas City Society of Ophthalmology & Otolaryngology (KCSOO).

Request Your Appointment
our locations